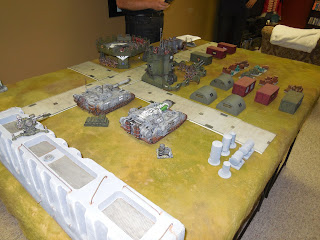 Force escalation is a wonderful thing - it drives us to move stuff from a wishlist, to the painting queue, to the gaming table. And the end result is spectacular games! Such has been the case with our Horus Heresy escalation project. Greg's been working on Sons of Horus and World Eaters, Byron on his Death Guard, and me on my IX Legion lads. The objective has always been to have some large games in the late summer, and with it being August, that's where we are. So last Thursday we leaned on Greg to design a scenario for the first game in our mini-campaign, "the Defence of Orask". Here's what he came up with:

The machinations of Horus are revealed, and they reach well beyond even the events of the Istvaan System!

Knowing they would not join his cause, Horus dispatched the IXth Legion to “liberate” the worlds of the Signus Cluster - a campaign far from Terra, far from Horus’ plans, and home to a trap.

The Primarch of the Blood Angels has led the bulk of his Legion into that distant assault, and Horus now looks to cut them off completely from contact with the rest of the Imperium. He will do that with an attack on the frontier world of Orask, staging area for the IXth Legion’s invasion force.

As news of events on Istvaan reaches Orask, the local Imperial government is stunned - and panics when their sensors detect a task force of ships bearing the signals and markings of the Sons of Horus, the World Eaters and the Death Guard headed for the planet. Things get worse when a number of Horus’ agents take action, disabling defence systems, monitors, docks and other elements, sowing further panic. The traitor Legion elements crash through the scattered resistance among the orbital defences and begin to secure landing areas.

On the planet’s surface, elements of the IXth Legion - the 66th Maniple, the “Blood Drinkers”, reserves which had been planning to follow their brethren toward the Signus Cluster, instead turn to defend the planet, knowing if Orask is overrun, the bulk of the IXth Legion will be trapped in the Signus Cluster and unable to defend the Imperium from Horus.

In our first game the Blood Drinkers will rush to try and defend against one of the rebel landings, hoping to contain the enemy and buy time to secure the capital…. 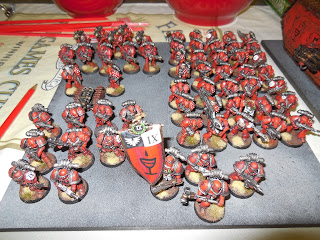 Here is the Blood Drinkers force. Praetor Draculis and command squad, Veterans to the left, Rapier behind just in front of the Tactical Support squad and the heavy weapons squad. Masses of Tactical Marines at right. 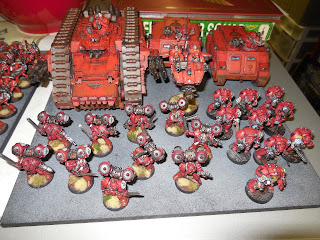 But wait... there's more. Assault squad and Terminator squad, with Rhinos. Landspeeder and THIS. IS. SPARTAN!!!! ;-) 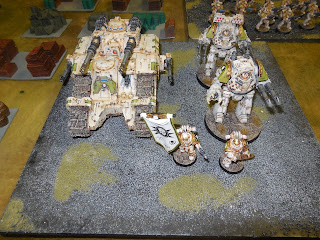 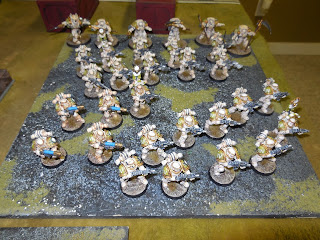 Plus Terminators, Support squad and tactical marines too. 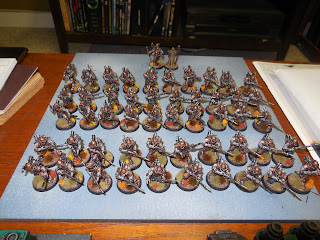 Solar Auxilia joined the Blood Drinkers in defense of Orask. Greg has done a great job with these. 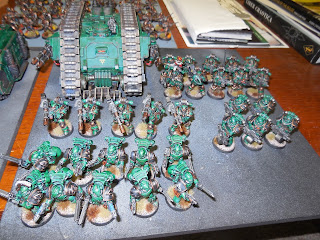 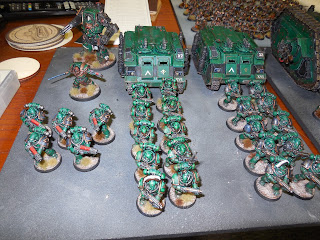 The battlefield represents a tactical staging area for the Orask planetary defense force/Solar Auxilia. The superheavy tanks are under repair and won't take part in the battle (tonight anyway). The Blood Drinkers and Solar Aux defenders were allowed to deploy in the Bastion (at centre) and behind the defence line around it, as well as in the area "south" and "west" of the roads (assuming that "north" is the short table edge at top right of picture).

The objective was to control the Imperial Bastion at the end of the game. 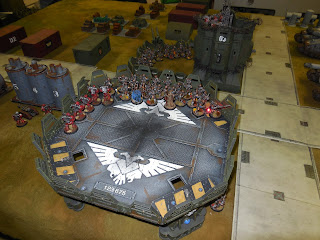 Solar Aux mobbed up on the top of the landing pad with excellent fields of fire over the approaches to the Bastion. Their comrades deployed behind the defense lines. The Blood Drinkers were allowed three infantry elements on table - the Tactical Support squad with Volkite Calivers on the landing pad, the Rapier carrier behind the storage tanks, and the plasma cannon squad on top of the Bastion. 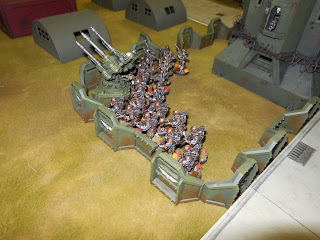 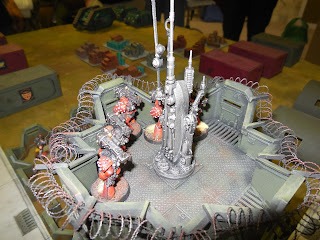 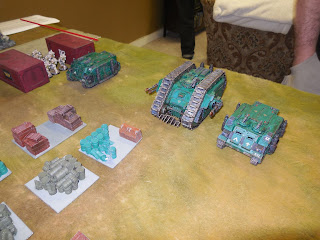 Traitors got the first turn; Death Guard walk on, accompanied by the Sons of Horus vehicles. They drew first blood, if you can call fragging a single Solar Aux dude "first blood". 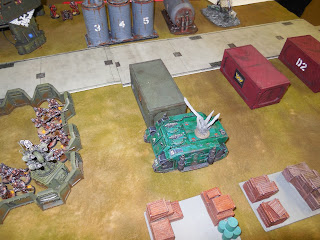 Where's the Death Guard gone? The entire squad was wiped out by Blood Drinker plasma cannon fire. That's what I call "first blood" ;-) Masses of Solar Aux lasrifle fire and Quad autocannon fire scratch a hull point off the Rhino. 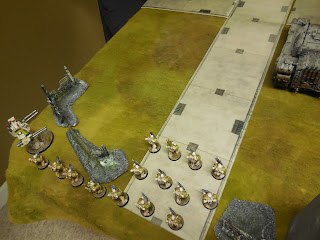 In turn two, the Blood Drinkers started to roll for Reserves to bring the rest of the force on board. However, the Warp was playing up (and Orask Telecom was subsequently not to be trusted), and for each successful Reserve roll, Byron was allowed to attempt disruption with his Death Guard... basically an opposed die roll. If the DG won the die roll, they were allowed to bring one of their own units in Reserve on table, instead of the Blood Drinkers getting their unit. So guess what happened - three Blood Drinkers units available, three Death Guard challenges, and three Death Guard wins. Three DG units appear in the Loyalist backfield, uh-oh... 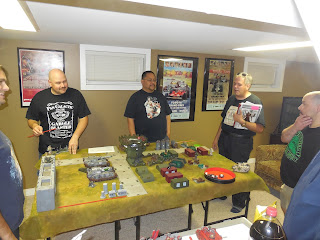 But the news got worse at the top of turn three. Greg explained that the Warp was in turmoil... 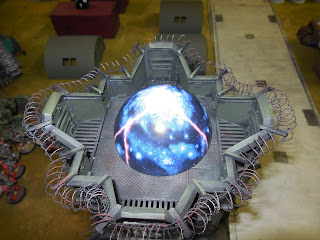 ...the Solar Auxilia were beginning to panic... 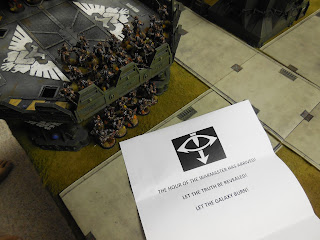 ...and their treason became complete! The Solar Auxilia switched sides to ally with the forces of the Warmaster!!

The victory conditions of the game changed at this point as well - in order to win, the Traitors had to ensure that not one Blood Drinker Marine survived! This whole development had the potential to cause some serious problems for the IX Legion as at that point, there were only 9 Blood Drinker models on the table! (Greg surmised that this stab in the back was likely a contributing factor to the Legion's later "rage issues") 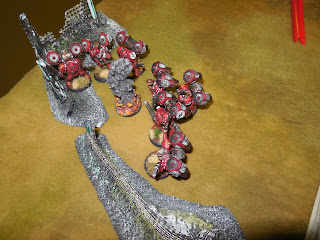 Blood Drinkers reinforcements did start to arrive from reserve, though. The Assault squad came on and shot, then assaulted the Death Guard Contemptor Dreadnought and Support squad camping on the Loyalist table edge, wiping them out. 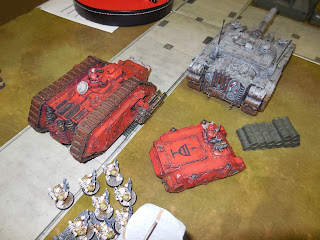 The SPARTAN!!! and a Rhino rolled on as well. Just out of shot, the Praetor and command squad were about to assault the other Death Guard tactical squad, and eventually eliminate them. 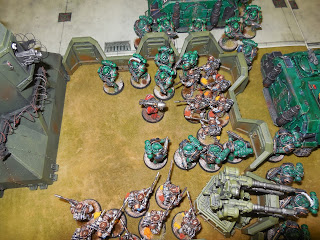 Around the Bastion, the psychic tsunami had blown the two remaining plasma cannoneers out of the building and into the midst of the now-suddenly-unfriendly Solar Aux and Sons of Horus. Undaunted, they blazed away with their plasma cannons but sadly the scatter of a template took one of them to the bosom of the Emperor. The last remaining hero bellowed his defiance as the Traitors cocked their weapons... 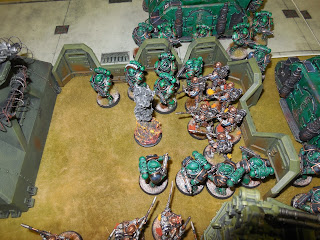 ...and blew him to his component atoms. 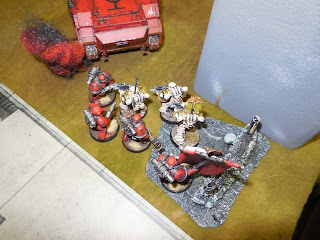 Meanwhile, back on the Loyalist table edge the Praetor and co. were dealing with some Death Guard. Byron's boys had it pretty rough in the game. 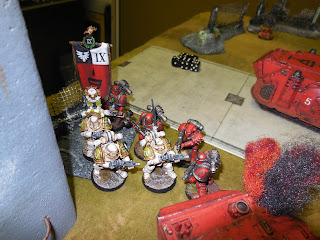 A moment later there were none left standing... 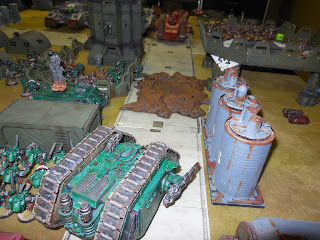 The Sons of Horus formed up for a last push on the bastion. The crater at centre is where their Rhino once sat; the laser destroyer array on the SPARTAN!!! had done as the name indicated. 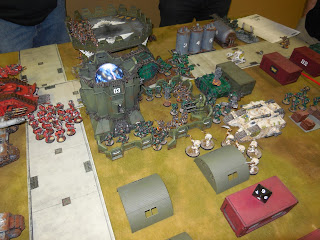 The SPARTAN!!! disembarked its 20 Space Marine passengers in preparation for a last push on the accursed Bastion. The Landspeeder (just above the SPARTAN!!!) supported the remnants of the Assault squad in attacking a Solar Aux unit standing just under the landing pad. The Solar Aux volkite weapons were suffcient to see off the charging Blood Drinkers though. 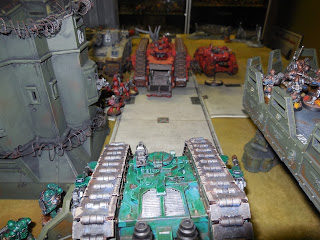 Two mighty machines of the 30th Millennium face off. 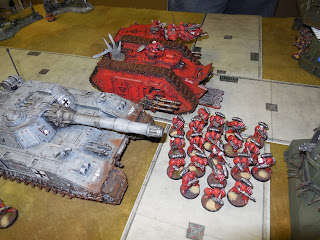 Blood Drinkers make a mad rush for the Bastion... 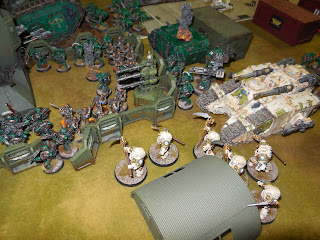 ...but the turn limit expired before they could complete their victory by obliterating the last pitiful remnants of the Traitor forces (j/k). The game ended in a draw - the Traitors controlled the Bastion and its communications array, but the Blood Drinkers survived the encounter and are able to wage guerilla war against the forces of the Warmaster, and try to hold open the Signus Gate for the return of the rest of the IX Legion.

We had a great turnout of lads for the game and I think we all really enjoy "30K". The models are amazing, of course, and the gameplay is a lot less complex than 40K because there are a lot fewer special rules to remember. Looking forward to the next escalation in the campaign!
Posted by Dallas at 3:25 PM

Been looking forward to this, and you guys didn't disappoint! :-)