Has Games Workshop Gotten Its Mojo Back? 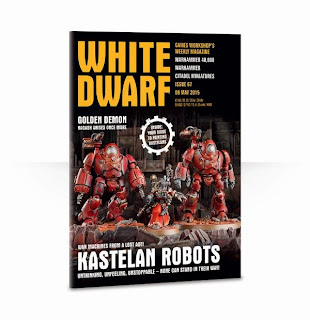 We've done our share of ragging on Games Workshop over the years, and Emperor knows they've deserved it. From "new paint" debacle to retail fails (not to mention stratospheric price increases, insane managing directors and skull-itis), the so-called "Evil Empire" has come in for some stick on this blog.

But we've always been big fans of the grimdark future of Warhammer 40,000. However, despite the fact our group plays 40K regularly, I've not been excited enought about the new models to buy any but a very few at full retail (even my Imperial Knight was bought online at a discount). Make no mistake, I've spent lots on GW product - but pretty much all of it out-of-print metal models for my Blood Drinkers or OOP conversion fodder/Forge World stuff for my Chaos Renegades.

But all of that may be about to change. Because Adeptus Mechanicus. 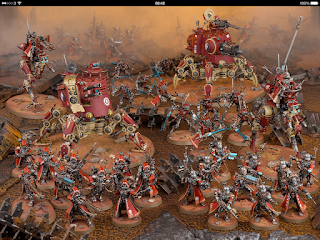 Last Saturday's White Dwarf featuring the new Imperial Knight Warden (and a cool paint chart) had sold out by Sunday afternoon. This followed two weeks of Mechanicus spam - Skitarii Rangers and Ruststalkers one week, and Onager tank the next. I snapped up and devoured both these issues eagerly. With these releases, GW has recaptured (for me, anyway) the coolness and nihilism of the original Rogue Trader milieu. I love the look of the half-mechanical robed Skitarii and even their walker tank is growing on me (still not sure about the Ironstriders though). I even bought the Skitarii codex!!!

But then this week, they kicked it up another notch with the Kastelan robots. Now if there were ever a modern model influenced by Rogue Trader style it's this one...

I haven't felt this inspired by a Games Workshop new release since... the Imperial Knight in 2014? And before that, maybe... the new-look Land Raider perhaps? Forge World has been consistently knocking it out of the park for me with their Heresy stuff and before that, Chaos Renegades. But the Mothership has been pretty flat for me for a few years. Until now! I have to say that these new Adeptus Mechanicus releases have me pretty stoked. Full retail on the Kastelan maniple (two robots and Techpriest buddy/handler) is $83 CAD which... I don't find completely shocking/unreasonable. And these models will be eminently suitable for duty in the Heresy as well, which makes them an even better deal. As Greg said, now that we have the Reaver Titans, it would be irresponsible not to paint some Skitarii for ground support. Of course, the truly responsible thing to do would be to add a Robot Maniple and Onager tank, right?

And it seems that many of you agree. In our recent poll, just over a third of you (34%) said you were planning to buy some Skitarii models either for 40K or other gaming, another 53% said you liked the models but had no plans to buy, and only 12% indicated they disliked the models. At least as far as our readers go, GW's doing something right.
Posted by Dallas at 9:06 AM

They're not bad but still not there for me. I picked up some of the Forge World Mechanicus stuff which IMO still looks much better than these new GW designs. I find they are still too heavy and cartoony for my tastes (for example, that land crab thing looks ridiculous). I think the Mechanicus designs should be more disturbing, really reinforcing their step-from-humanity, transhuman/cybernetic designs. To me these are just not 'Blanchian' enough.

Nonetheless, it's good to see you getting bitten by (anohter) bug! All hail the Onmissiah!

The new Kastelan/Castellan looks great. And the Skitarri are nice - but those walker tanks are just a bit...lame...

I thought that the massive Dunestalker turret might look cool on a tracked chassis a la Russian KV-2. I love the Robots unreservedly, though :-)

I hardly ever buy new/current GW product for a number of reasons (oddly enough the actual price itself not being one of them). Recent years have seen much of their ranges become silly, overdone and lose character at the same time. The new AdMech stuff is definitely a step in the right direction though IMHO...

The Castellan robots are my favourite 40K models in about 15 years. I might actually buy them. And by "might" I mean "its almost a certainty" ;-)

They are definitely a step up for me, but still a mixed bag as you suggest and so still not enough to tempt me. Probsbly. I guess my feeling of having moved on is just too strong to be tempted back to the gold-plated GW fold.