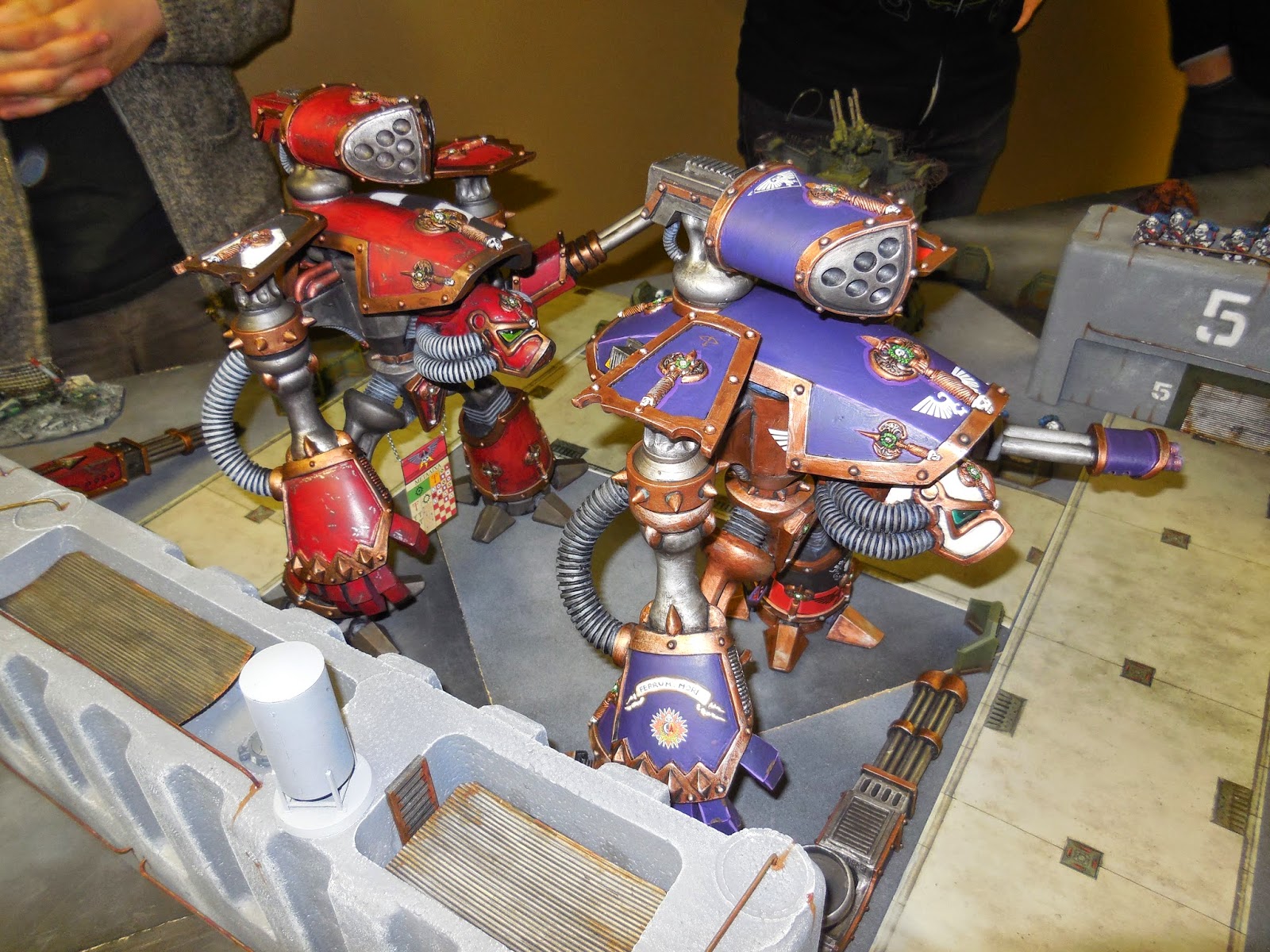 To celebrate the completion of our two Reaver Battle Titans, Conscript Greg and I decided to stage a Rogue Trader game with the titans as featured players. No, we didn't troll old White Dwarfs for Reaver stats or anything like that - we fully recognized that these are not models you want to play with in RT; they're much better used as scenery or objectives. So Greg devised a scenario to take place on Isstvaan III, with loyalist Space Marines (ironically, from the Sons of Horus legion) and Solar Auxilia raiding a rebel-held Titan Yard, with the objective of destroying the Titans housed there for repair. 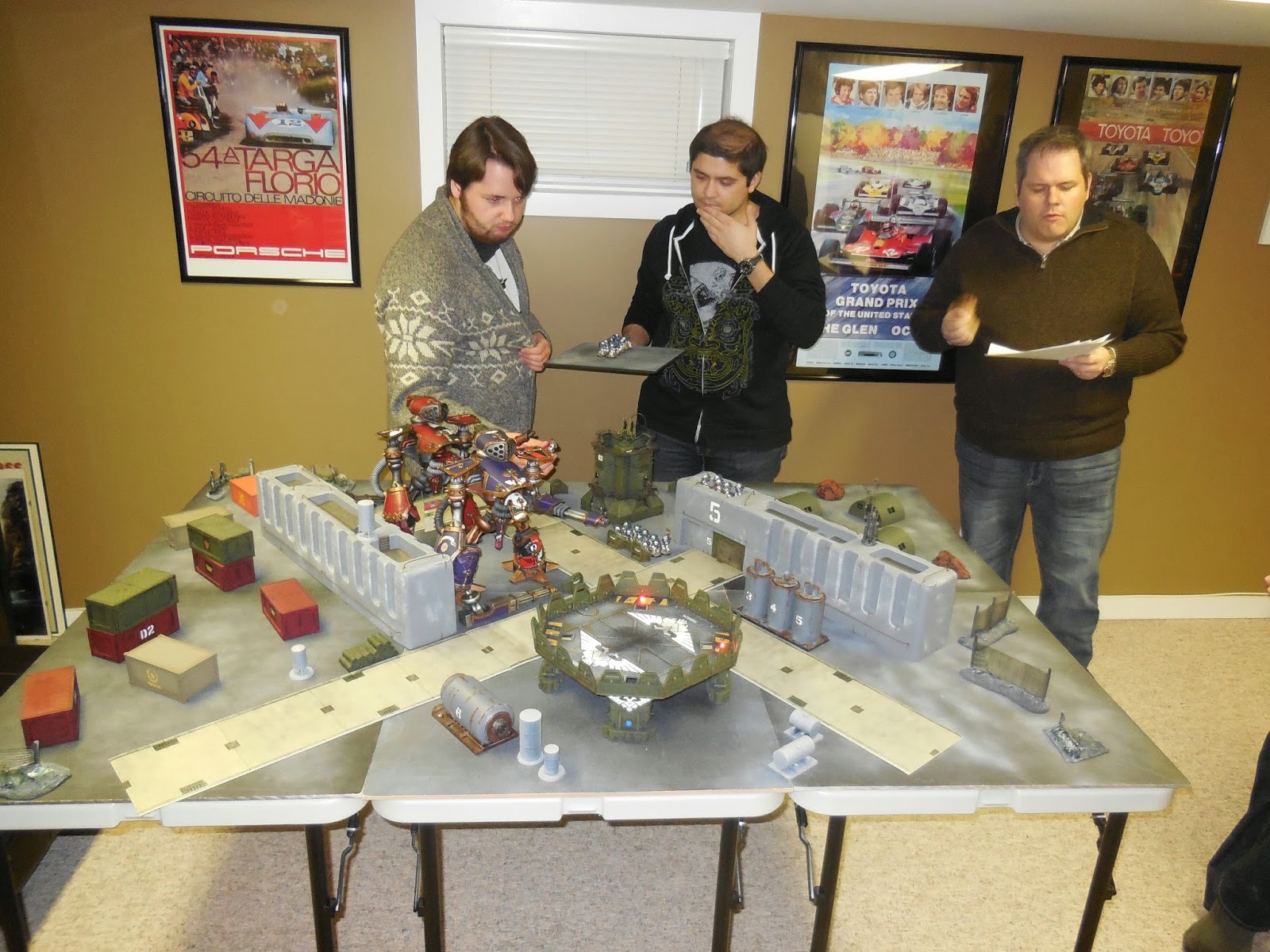 The loyalists were armed with a mobile Void-bomb vehicle - represented on the tabletop by a 1/48 Goliath from WWII. Their goal was to get it as close as possible to the Titans before detonating it, hopefully catching the colossal god-machines with their void-shields down. The traitor World Eater Marines defending the Titan yard had to stop this from happening. 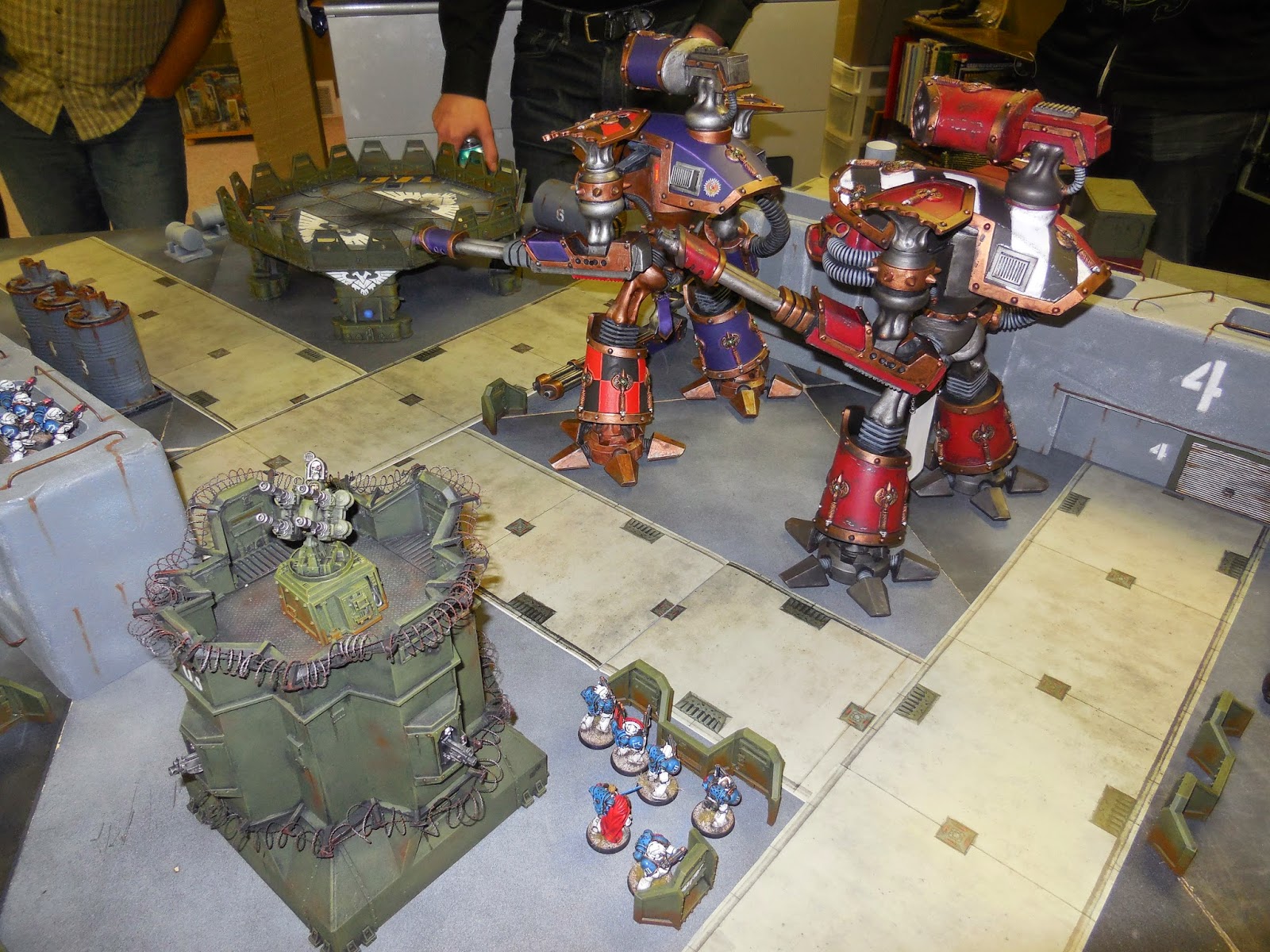 A great opportunity to use some massive terrain pieces - the styro-crete walls, Imperial Bastion, Aegis Defence Line and Skyshield LED pad were all deployed. Plus of course the Titans! 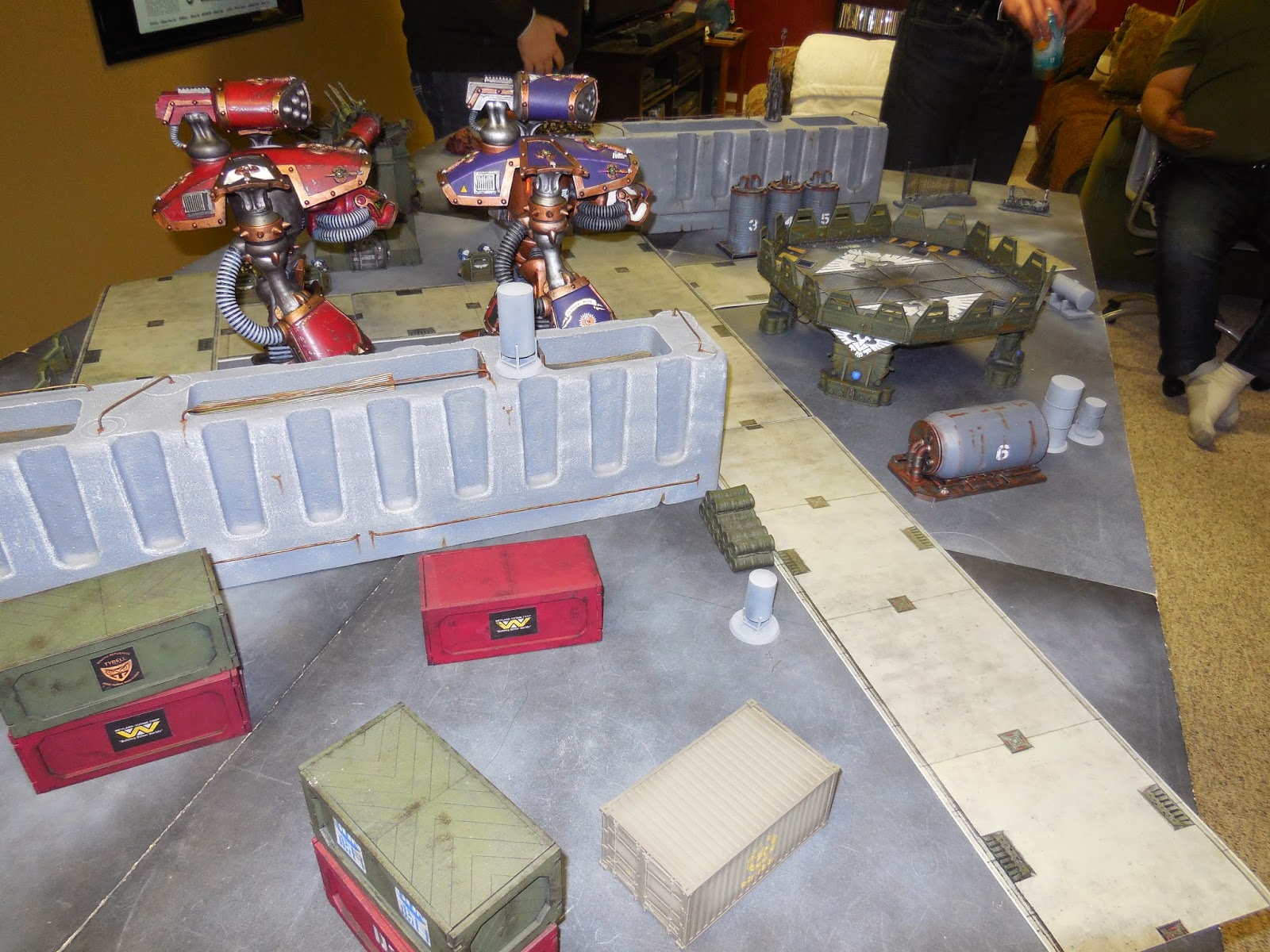 The view from the loyalist table edge. 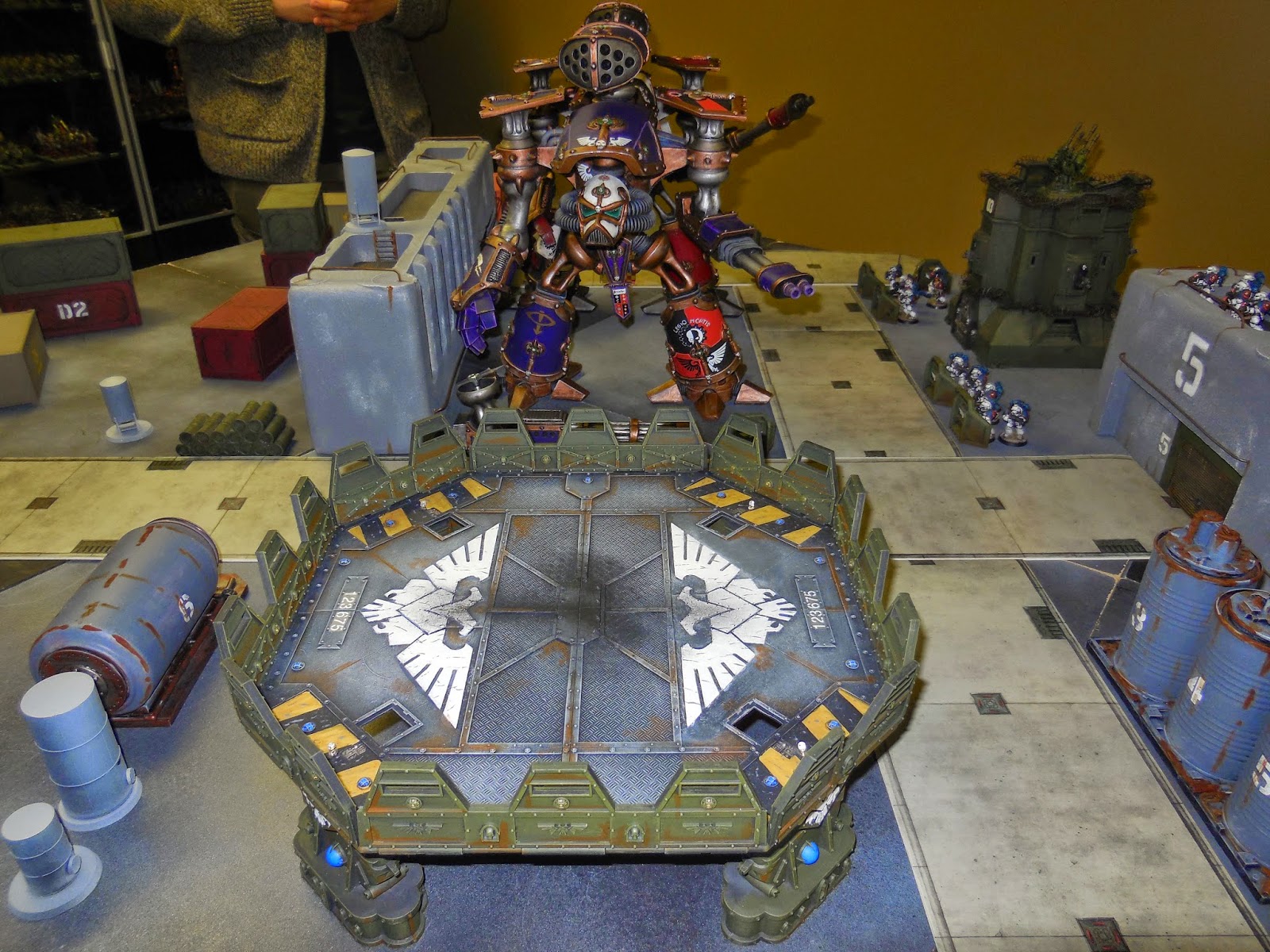 Traitor squads can be seen deployed at top right behind the Aegis lines. 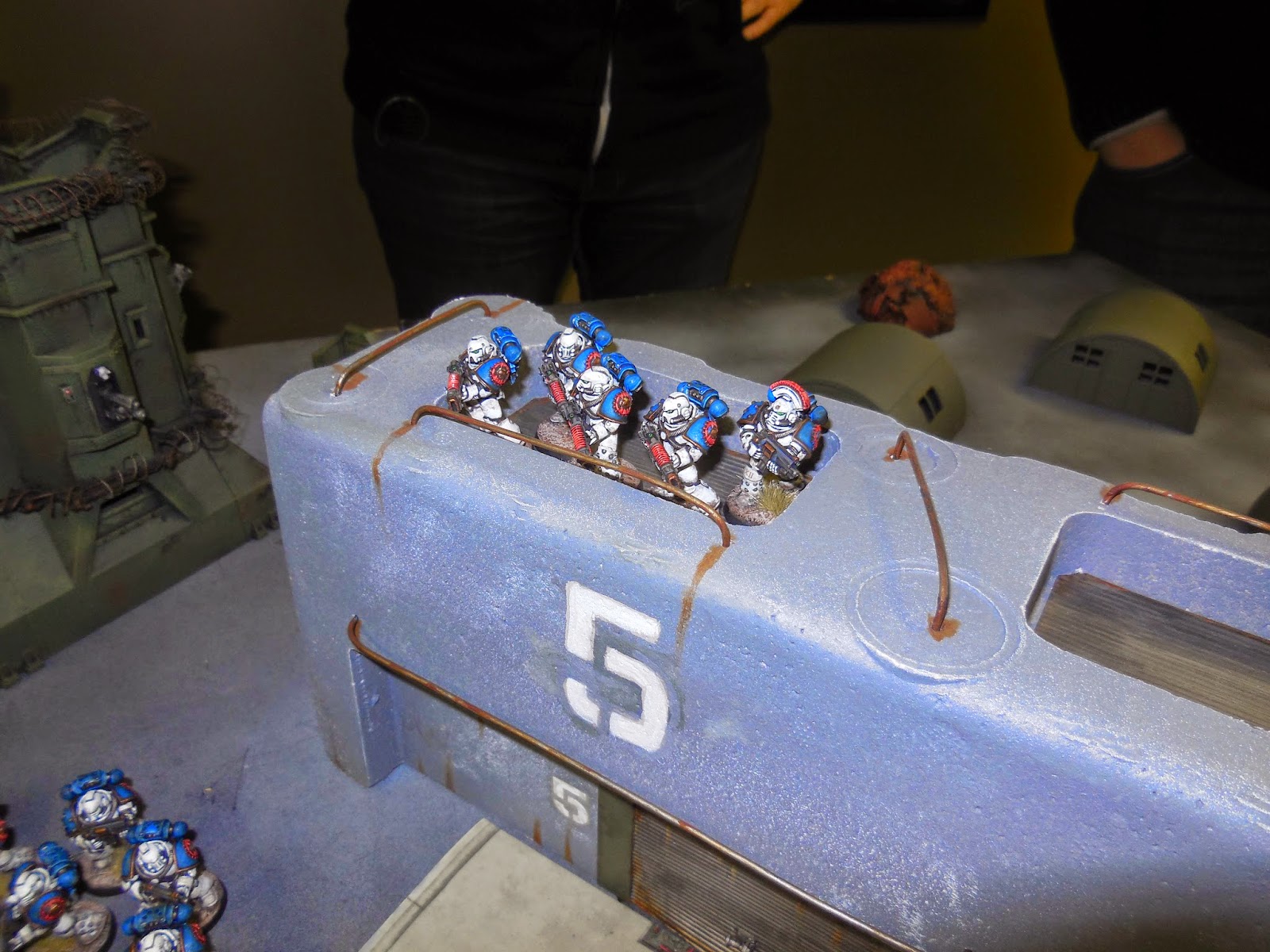 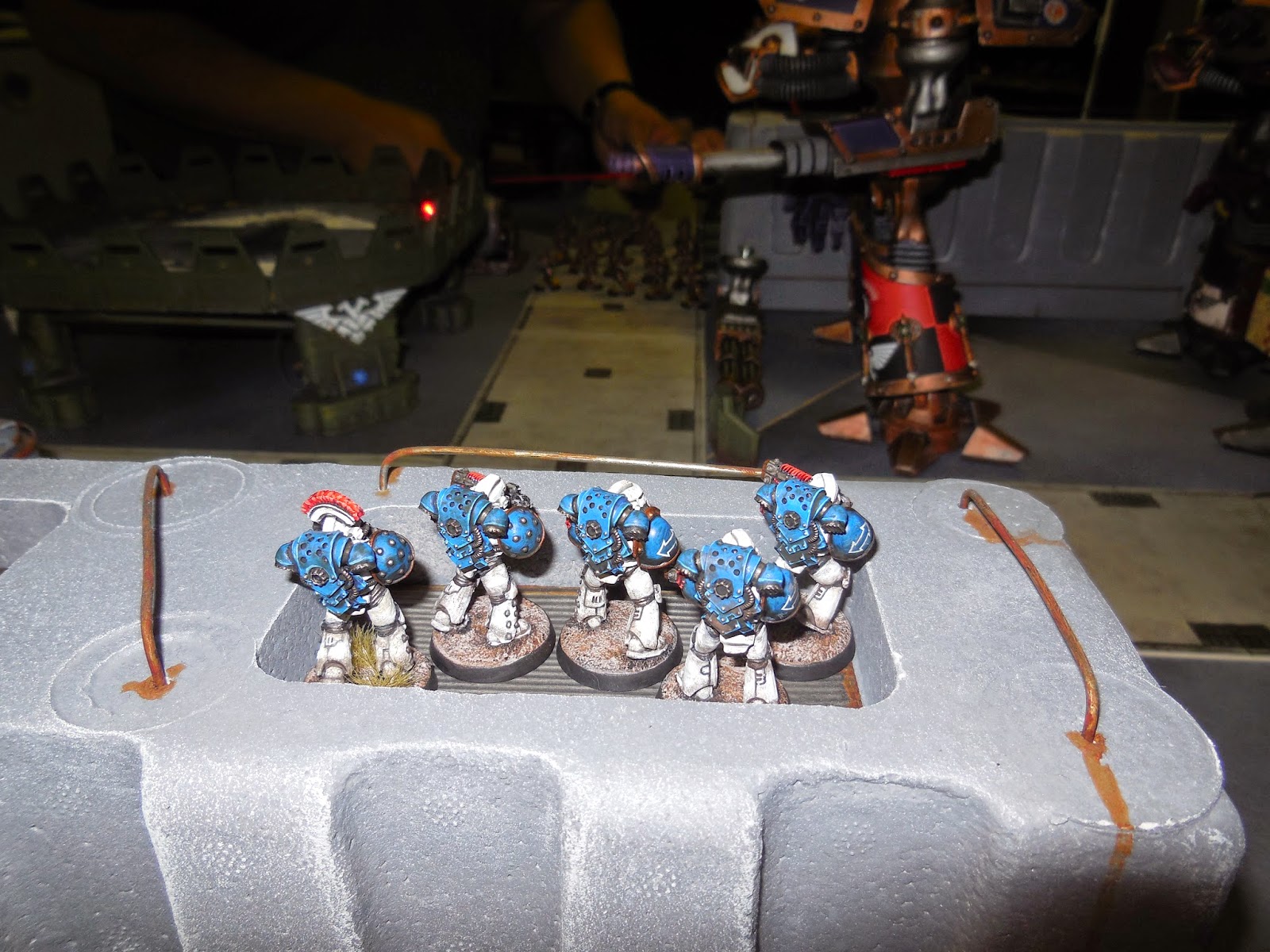 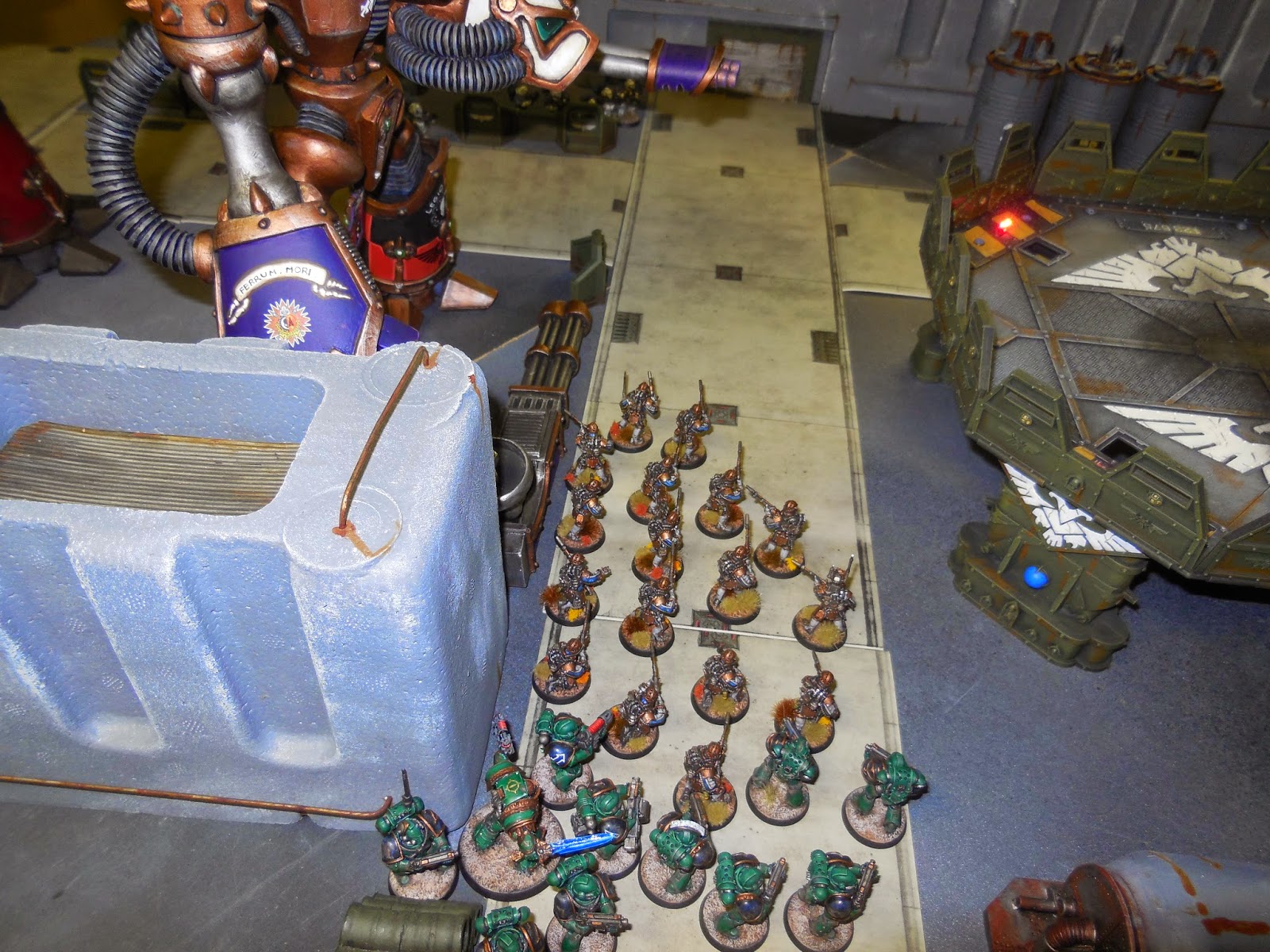 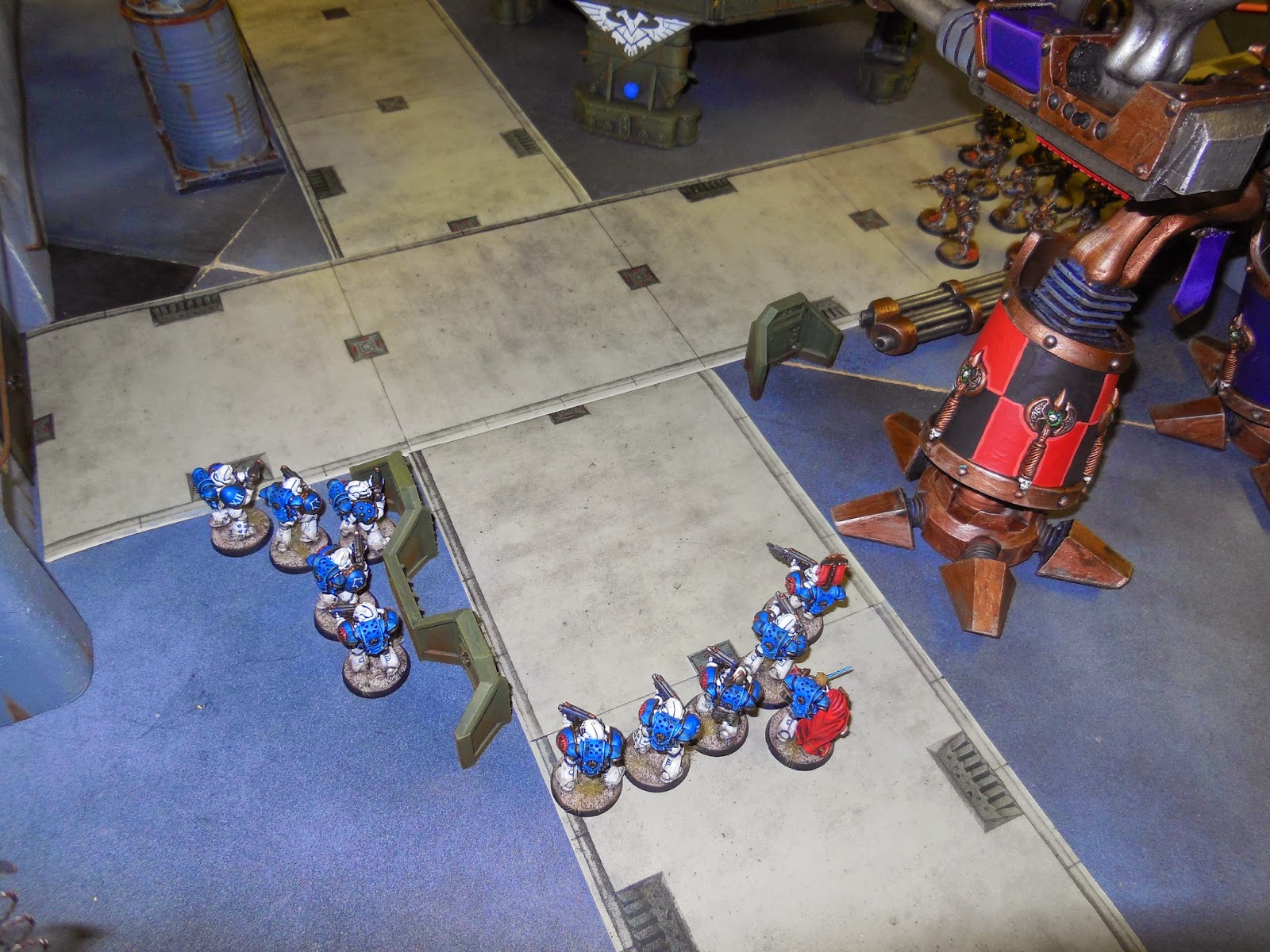 As the Solar Auxilia advanced, the traitors started to swing the gate... 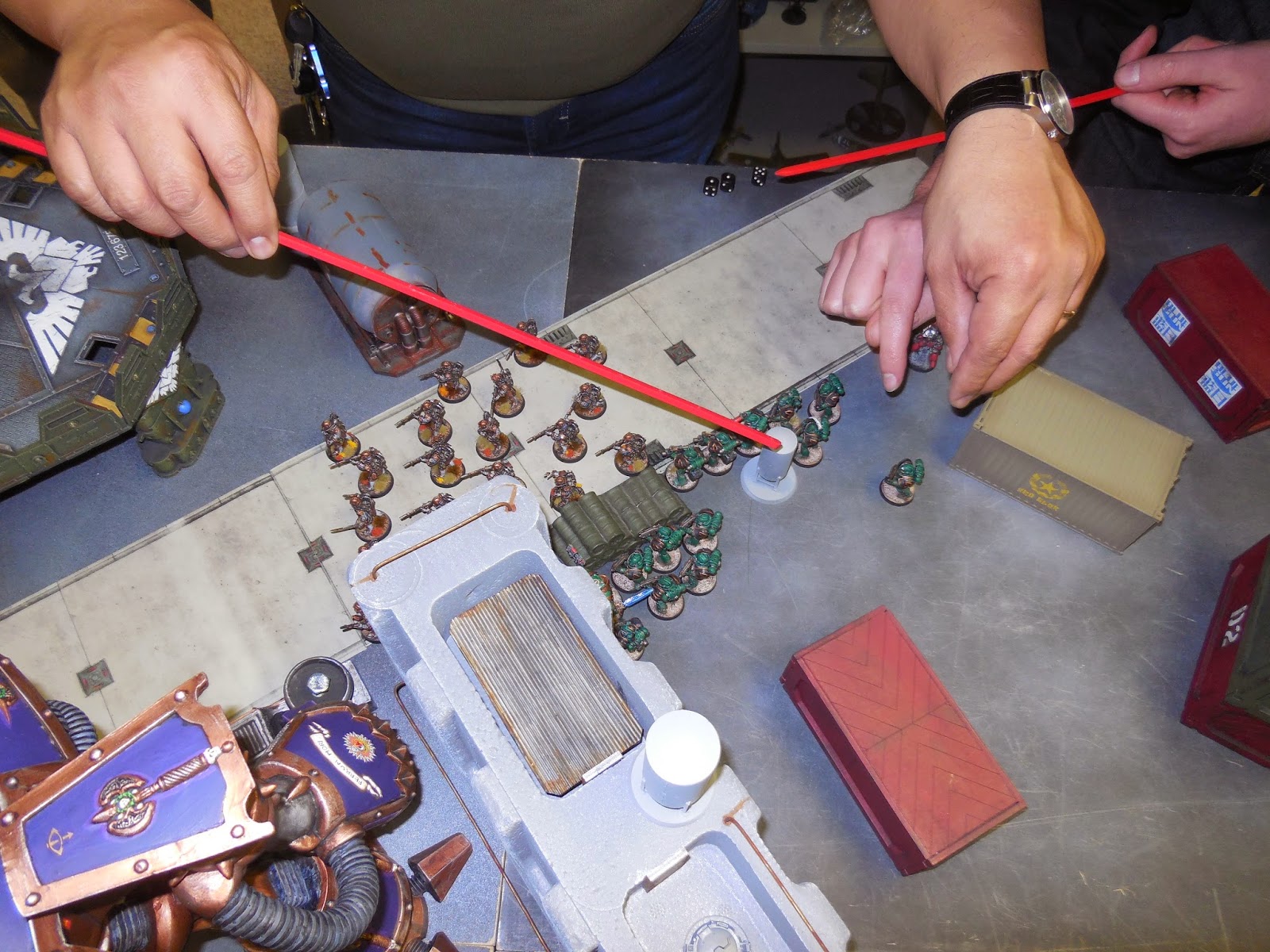 Loyalist Marines hiding behind cover. Their cowardice will not save them from the final reckoning with the followers of Warmaster Horus!! 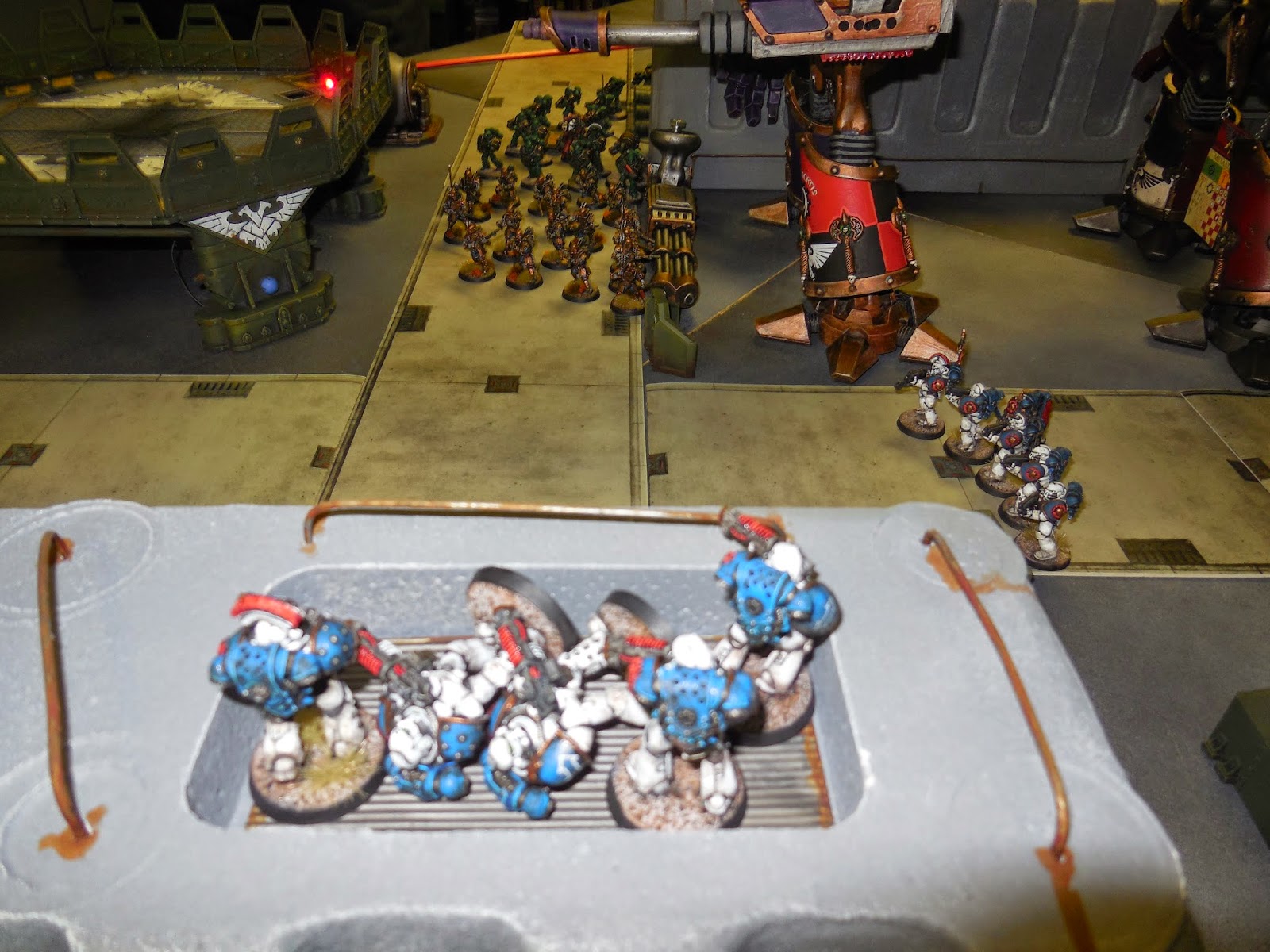 Some of the Volkite dudes got picked off. Their faith was lacking... 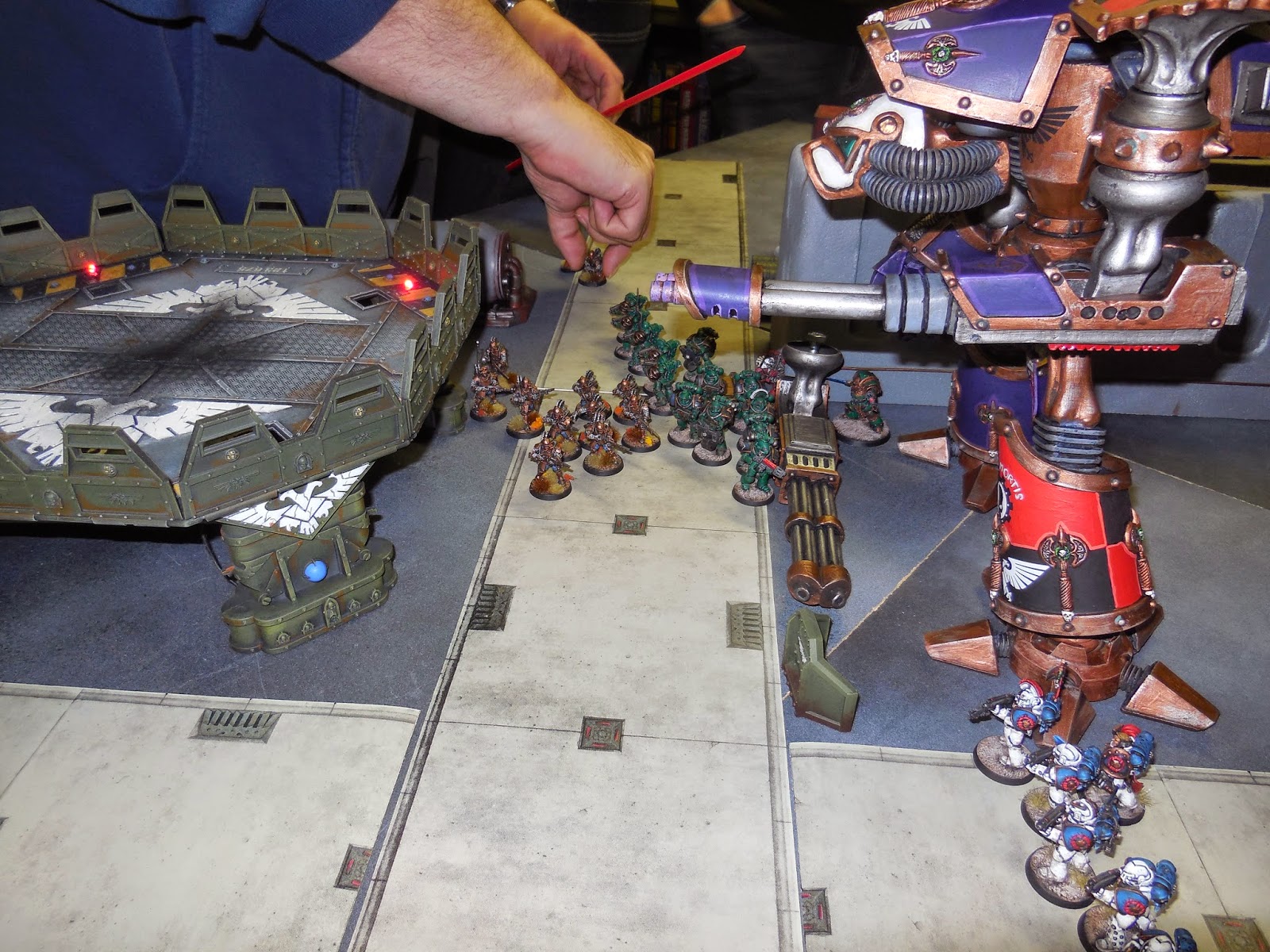 Loyalist bolter fire finally began to tell on the ranks of the Solar Auxilia as they failed their morale check and fled.

Later, the Solar Auxilia would need to rally. Conscript Indo was trash talking from the Warmaster's side... "they'll never be able to rally. May as well just take them off!" The dice were rolled and... 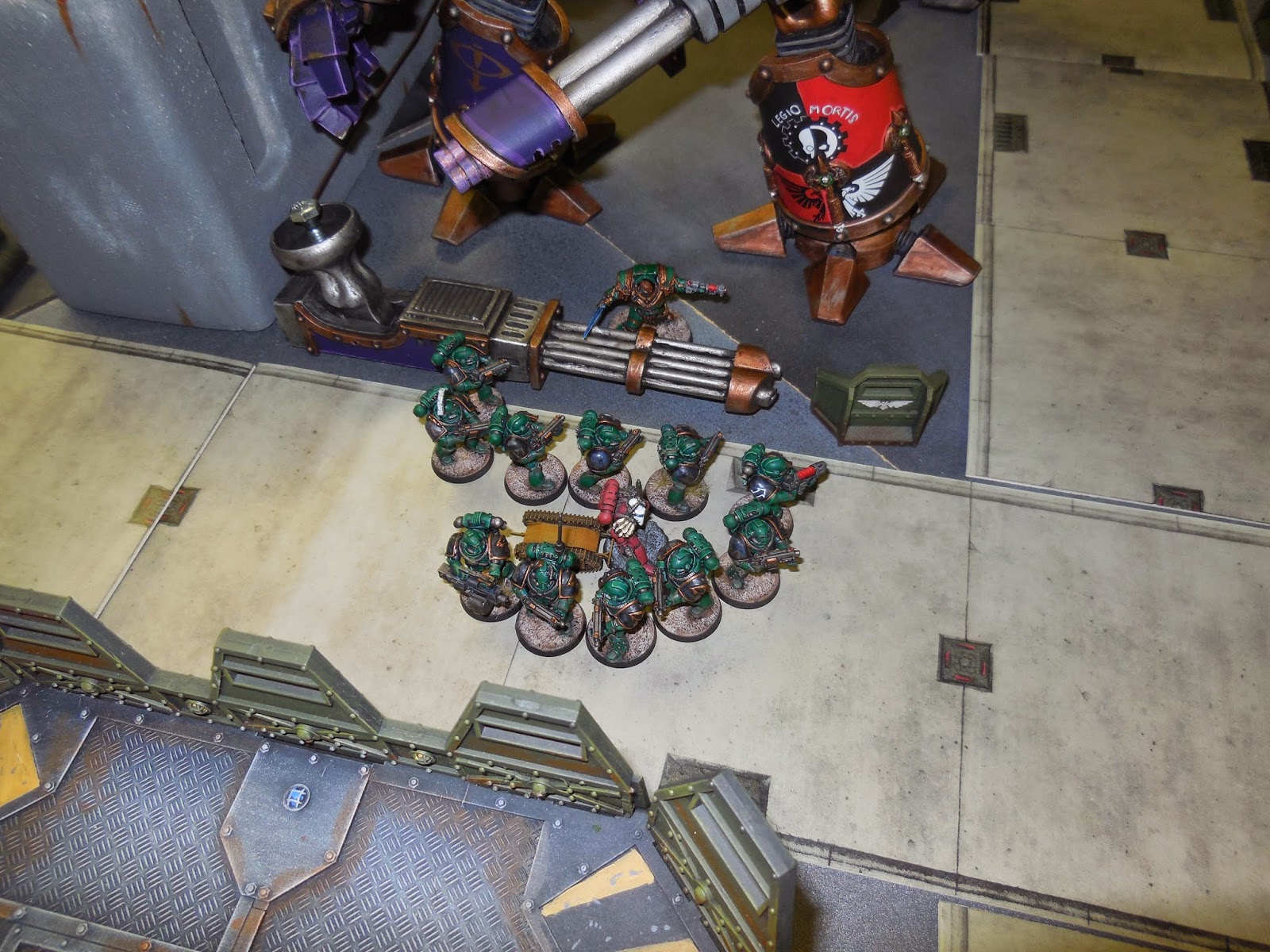 With the Solar Auxilia on a permanent vacation, the remaining loyalist Marines pushed forward on their futile suicide mission... 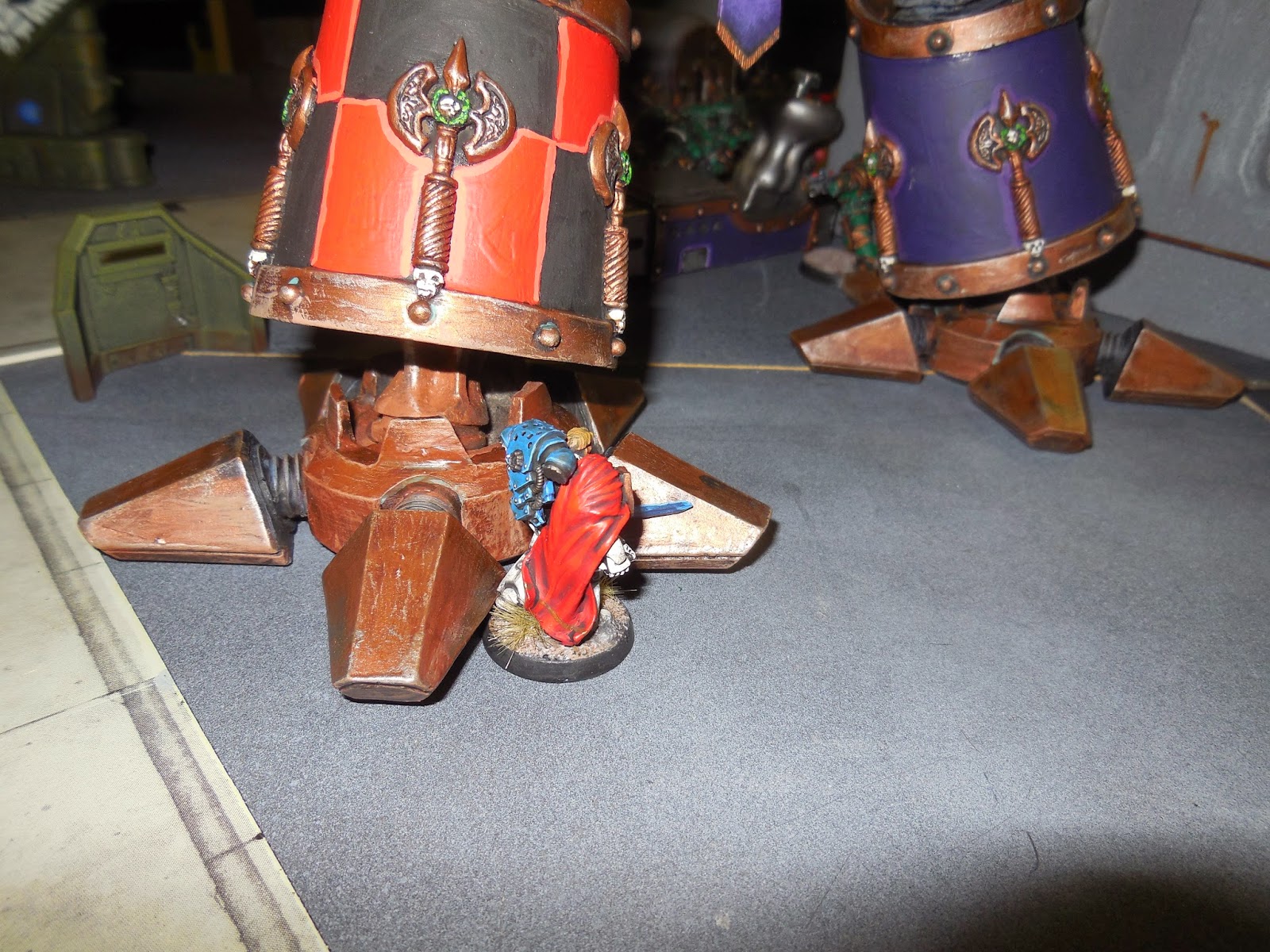 ...not realizing that the traitor captain was lying in wait. 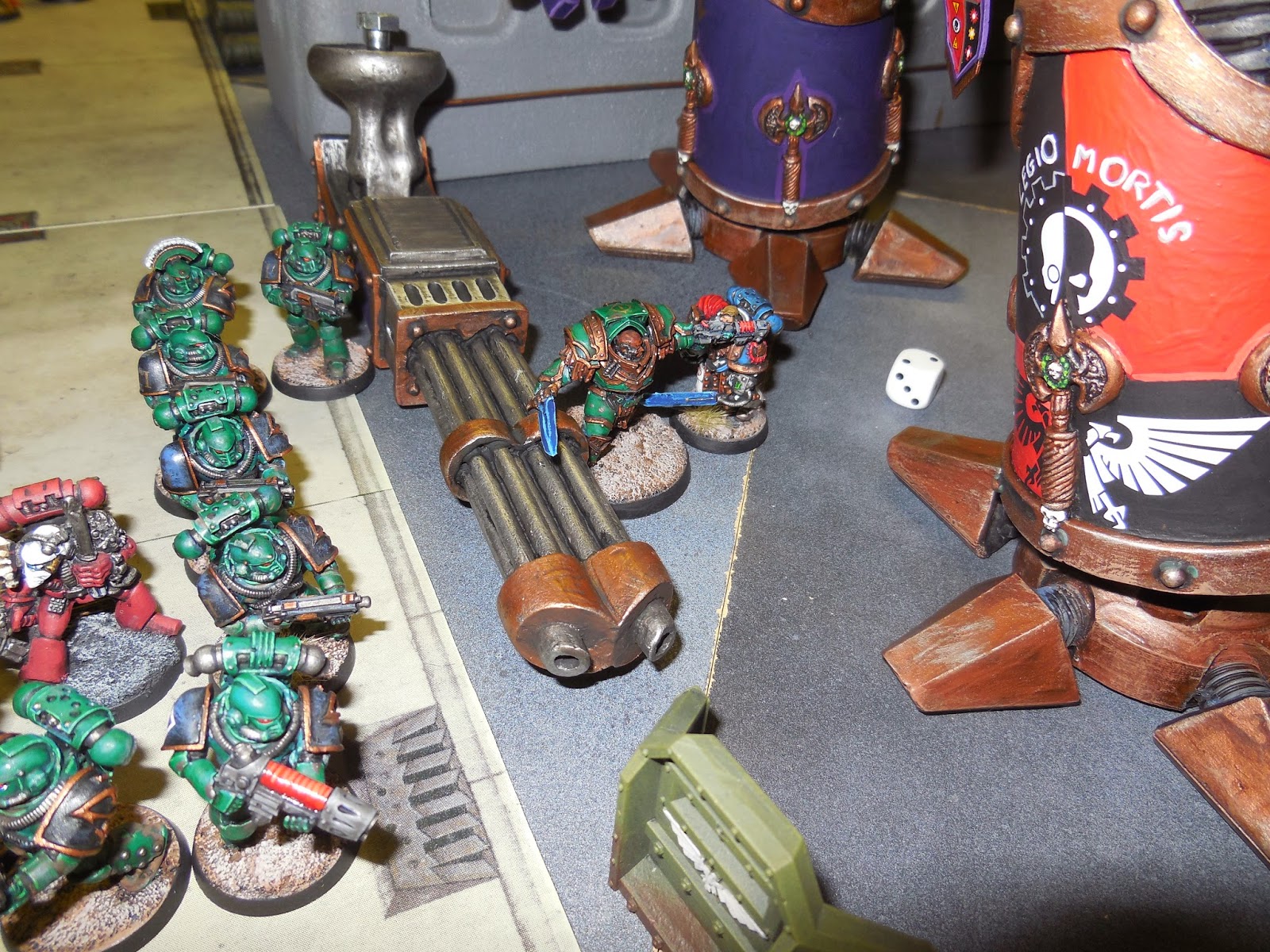 He charges in and close combat is joined! The air crackles with power as the two giants trade mighty blows. Faces are punched mercilessly as the follower of the false Emperor and the heroic servant of Mankind's Last Hope, the valiant Warmaster, strive mightily in combat. Nearby, a Techmarine nervously adjusts some dials... 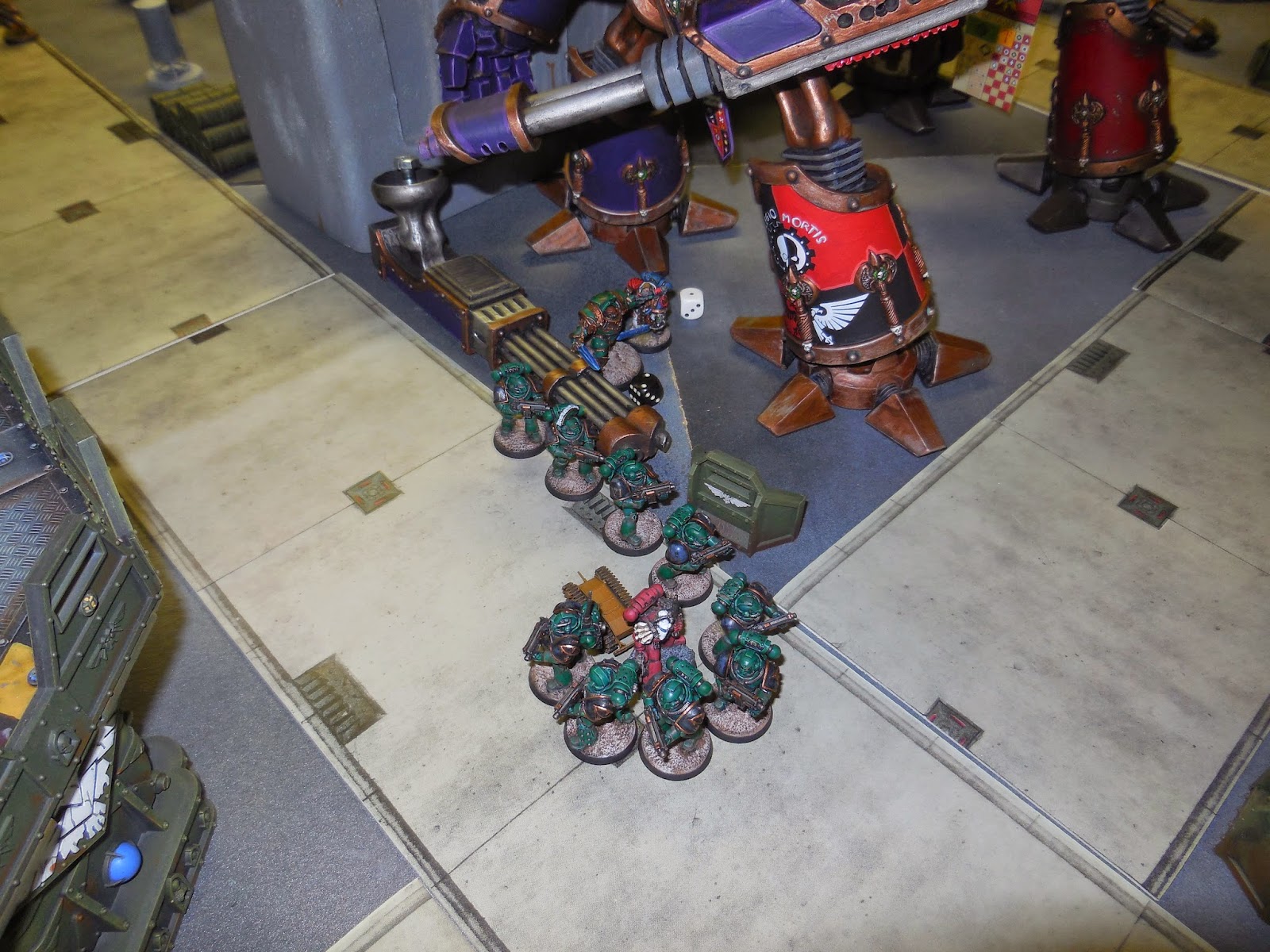 This is the last known pict-transmission received from Titan Maintenance Facility Omega Seven on Isstvaan III. The Adeptus Mechanicus adjuncts to the Collegia Titanicus had of course evacuated the facility, but from their vantage in low orbit they recorded wave radiation consistent with detonation of an Armageddon-Class Void Device.

Dice were rolled to randomize the radius of obliteration and the roll was sufficient to destroy Ferrum Mori and damage the other Titan. Of course the loyalist Marines were reduced to their component atoms in the process as well, but that's how things go in the Horus Heresy. And these are early days yet!

The game was great fun and looked good too. Greg's 30K models are awesome and the Solar Auxilia look fantastic. Thanks for bringing them out to play!
Posted by Dallas at 9:56 AM

Great post Dallas - you have captured the enlightened and progressive view of Horus very well :)

Everyone really got into the game, it was a lot of fun. Poor old Istvaan...

Now that is a table!

Great table, especially the Titans. Looks like a lot fun!

That is a brilliant scenario and a great looking game - well done guys!