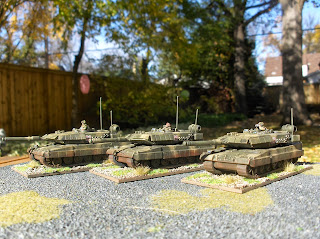 A couple weeks ago I posted some photos of a platoon of "Leopard 4A2s" - Leopard 2's that I'd converted with plasticard and metal bits into armoured support for my new 15mm NAC force. 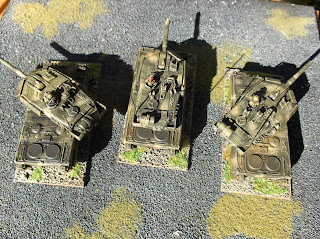 I have to admit that the original photos didn't really show the models off to their best advantage (in other words, they looked kind of crap) but I'm happy that the paint jobs have improved things significantly. 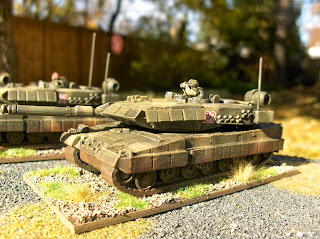 Since the models all came with open hatches (and a rubbery crew figure) I converted some GZG NAC figures to serve as crew. They came from pack no. A10. I simply cut them off at the waist and stuck them in the turrets - I think it worked out pretty well.  The crewman above was a kneeling figure looking through a monocular. 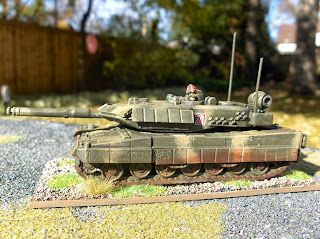 "Red" here was a standing female officer holding her helmet. She looks good as a tank commander. 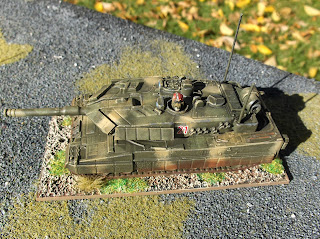 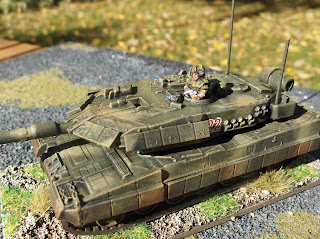 The chap above is using his iPad to work out a firing solution (or maybe just playing Angry Birds??) 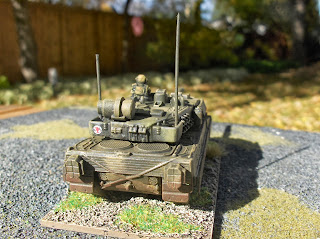 Conscript Mike dropped off some Battlefront decals the other night so I've used some as a squadron marking. 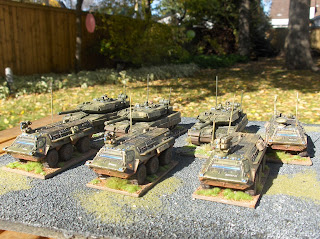 Here are the tanks together with the Siku Fuchs APCs painted by Holger. Pretty decent matchup I think. 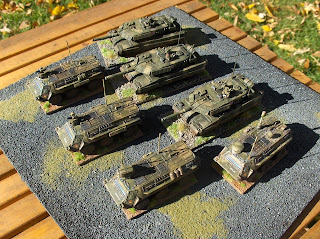 All in all I'm reasonably please with how the project turned out. It probably didn't end up being significantly cheaper than going with "commercial" ready-made 15mm sci-fi tanks, and the conversion took a bit of work, but the end result is unique and fits the theme of the force. Look out Control Battalion!
Posted by Dallas at 1:05 PM

They look great and you probably got more satisfaction from making them than you would if you'd just bought them off the shelf.

How is Control Battalion supposed to follow their peaceful development projects in the face of such outright provocation?

Neat conversions and paintjobs, your Leos match up really well with the Foxes.
Any plans for further expansion of your NAC force?

Good idea Kull. I'll try to tee that up soon!

No plans as such, OBM, but look for em in a batrep soon!