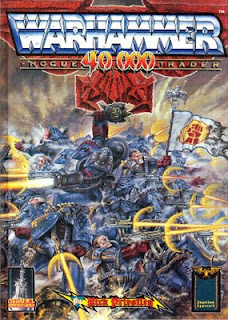 'Twas the week before Christmas, and all through the hous(es), many creatures were stirring, as Orks had overrun the planet.  In the heavy fighting, the Imperial Warhound class titan Revenge of Rudolphus, known affentionately as "The Red Nose", was destroyed by Ork Stompa mobs.  It seems, however, that the crew survived, bailing out from the crew compartment while the Titan went down, and now they are hiding in some ruins at the edge of an urban sector.  The crew sent a single distress signal on the way out, hoping Imperial forces would detect it, and then went silent, for fear of attracting too much Ork attention.

The Ork Warlord, Snagrod the Arch-Arsonist, is furious - meaning, more furious than he usually is. The victory is not complete without the heads of the titan's crew.  Snagrod rolls out personally with his lads to find these suriving humies and get them for his "collection", ready to finish the job the over-sized mek toys could not.  It's the holidays, after all, and the heads of the Titan crew would make great decorations.

Meanwhile, from the Imperial perspective, Titan crews are precious assets - way more important than any other ground-troop types. That means other, less important, lives, such as those of the ground troops, are to be risked in order to save them!

Will the Imperial forces find and resecue the Titan Crew in time for Christmas (where the crew will be ruthlessly interrogated to find out how it was they could have lost their precious machine)?  Or will the Ork Warlord get another set of "decorations" for his, er, "tree"?  We'll find out tonight!

Tonight we will ring in the holidays with a game of Warhammer 40k, using the classic "Rogue Trader" rules.  Of course, I guess they won't be completely "classic", in that we will play with some amendments, including:

So come on out tonight to Dallas' place and hearken back to the time when Warhammer 40k was a fun skirmish game!
Posted by Greg B at 1:20 PM

This will be awesome. Hope we can throw Da Red Barun in for some aerial wreck-onaissance ;-)

Christmas Rogue Trader Battle Reports for the win :-) Check out ours' here http://talesfromthemaelstrom.blogspot.com/2011/12/xmas-battle-report-fair-exchange-is-no.html