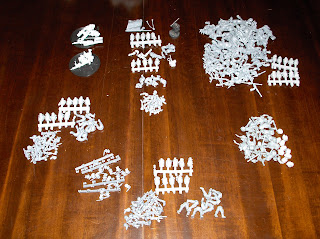 A pile of bits that might someday become an army...


With the recent... "enthusiasm" around here for Warhammer 40K I've joined Greg B. in "hooring it up" and now the bits that will become a Vraksian Renegade army are (mostly) assembled.


There are 40 Forgeworld Renegade Militia torsos in there and a whack of Cadian bits. The Chaos Death Riders will be the most interesting conversions: Chaos Marauder steeds and bodies, FW Renegade torsos, Bretonnian Knight right arms, Empire Militia left arms. The Beastmen will be made from Cadian torsos, arms and legs, and Beastman lower legs/hooves and heads. The Militia squads are straightforward, all Cadian parts except the FW torsos.


Not shown: 20 Mutants/Itinerant Sludge Farm Workers with guns (Warhammer Fantasy plastic Zombies with random firearms and Renegade Squad #1 (these are painted already), two Leman Russ Demolishers (one assembled), about 40 Armageddon Steel Legionnaires (Traitor Guard). Might grab a Sentinel or two and/or a Hellhound but that should about do it for the list. Now to assembly!