De Bellis Antiquitatis ("Of the Wars of Antiquity") used to be a big thing around these parts. The game, a fast-play set of ancients rules, was used for a long-running, twice-yearly tournament held at Conscript Frederick's school. I was taught the game by former North Dakotan gamer DougR, over drinks at a sci-fi convention. Over the years it provided me hours and hours of fun,


The game has languished for a few years now, going out of print for awhile, and undergoing a seemingly interminable re-design prior to the recent release of its latest, 3rd edition. Conscript Kevin was musing about how much fun we used to have playing DBA and its big-battle incarnation, "Mega-DBA".

Accordingly, for last Thursday night I organized an ancients battle (using DBA version 2.2) based upon the Battle of Heraclea, a big dust-up between the Roman Republic and a coalition of Greeks.

Pyrrhus has landed in Italy, in support of the city of Tarentum, who were in conflict with Rome. Pyrrhus had a mixed force of ~35,000 men: Greek/ Macedonian and allied heavy infantry (phalangites, hoplites, and hypaspists), war elephants, Thessalonian cavalry, and archers and slingers from Rhodes.

After hearing of Pyrrhus' arrival in Italy, the Romans mobilized eight legions with auxiliaries, totaling about 80,000 soldiers. They divided these forces into four armies. Three armies defended Rome and otherwise marched against the Samnites, Lucanians, and Etruscans, to ensure that they did not ally with Pyrrhus. One ~45,000-strong army, under the command of Publius Valerius Laevinus, marched to Tarentum (after plundering Lucania on the way).

Pyrrhus decided to fight the Romans on a plain near the river Siris, between Pandosia and Heraclea. Pyrrhus took up position there and waited. Before the fight he tried to treat with the Romans, who denied his request. The Romans entered the plains on the right of the Siris river where they set up camp.

Who would win this conflict between Legion and Phalanx?

Each side ended up having the equivalent of 4 complete DBA armies. With a ground scale of one inch = 100 paces, and one figure casting representing 250 men, each side had around 40,000 troops spread across a few miles of front! We didn't have some of the exact historical units, but the following is our approximation of the forces involved:


Below, Frederick and Bill loom over the table, after initial deployment. The photo looks south along the length of the Siris River valley. On the left (east) bank of the river are drawn up the two Polybian Roman forces. Further to the left/east, the Carthaginians are coming up from reserve. Near the north and south ends of the table are fords; everywhere else the river had to be crossed with restrictions as to movement and formation. Small units of Roman light and regular cavalry are set up by the far, southernmost ford. The Greeks refused their left (northern) flank. Dallas' Greeks are set up in a long line along the road. Further to the south are my Greeks and Bill's Seleucids in columns. Mike's lighter forces are set up to contest the distant river crossing. A forlorn hope of Greek and Seleucid light infantry are on the west bank of the river, staring at thousands of Roman legionaries. 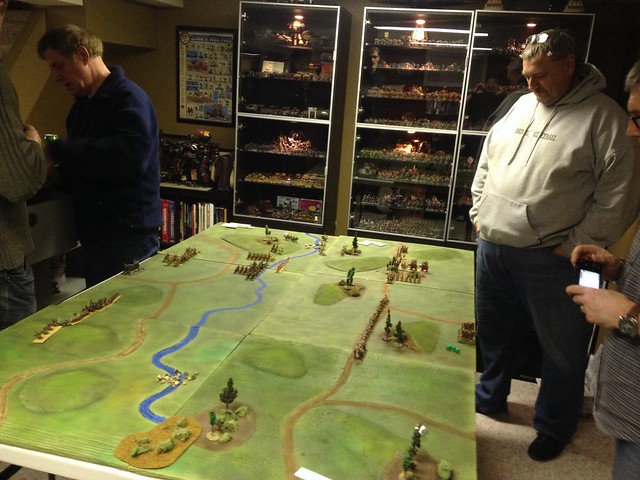 In the centre, Bill's Seleucids and my Greeks in column. My Greeks were modified and painted for me by TimP (of Gisby fame). All the spears are hammered wire. 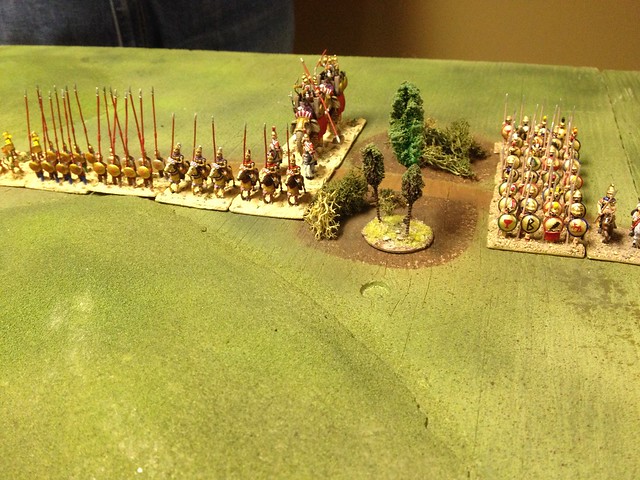 Dallas' Greeks in line; his figs are owned and painted by Conscript Brian, who replaced all the spears with hammered wire and hand painted all the shield designs. 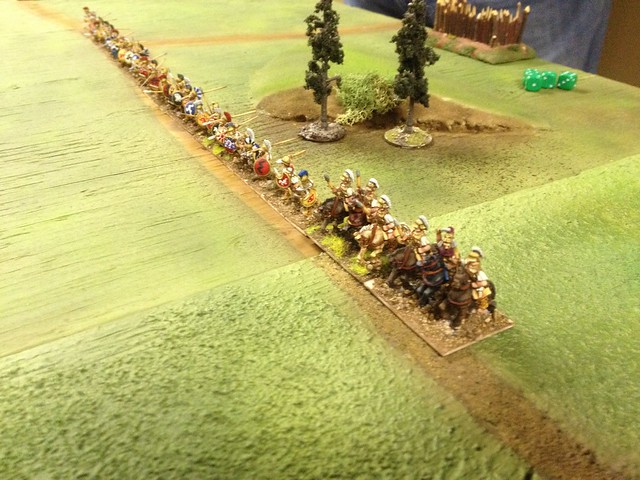 The Greek and Seleucid light infantry stare down legionaries across the river. 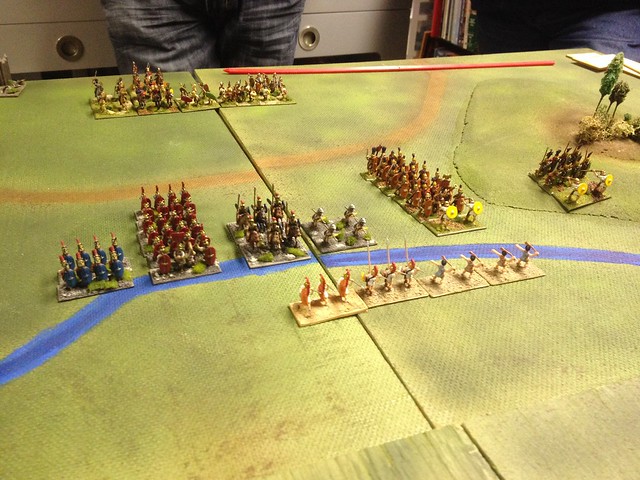 The battle started with light forces coming into contact under a hail of sling stones and javelins. 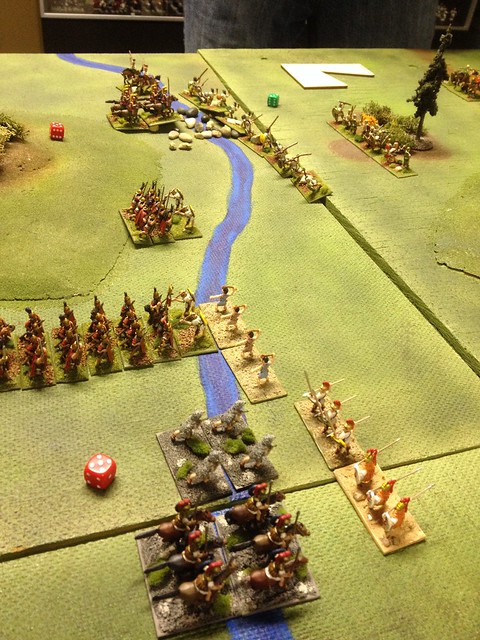 Though putting up a stout resistance, the Greek light infantry in the centre were overwhelmed by their more numerous opponents. 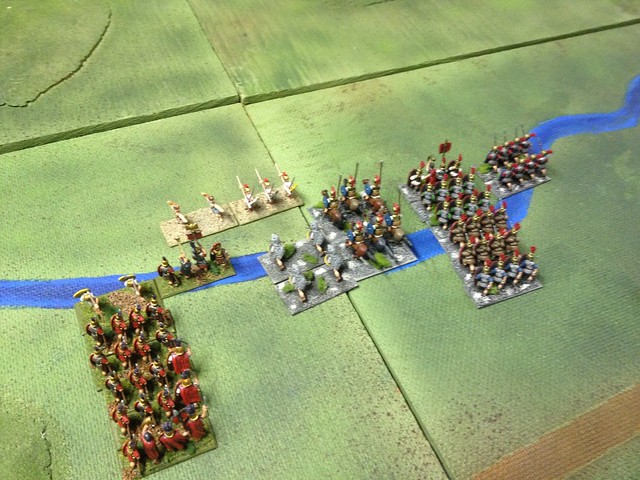 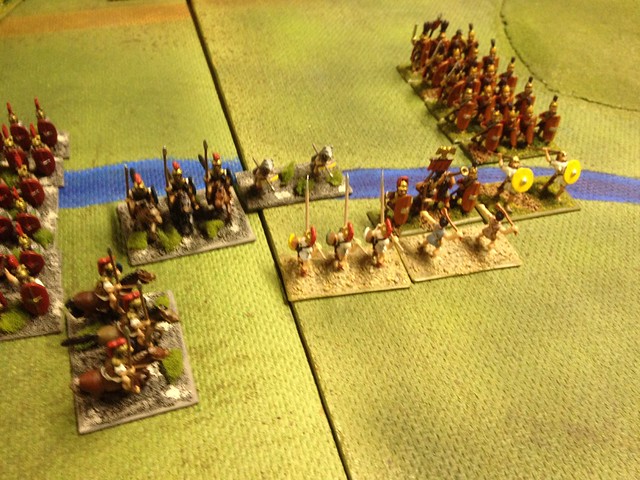 However, their sacrifice allowed the balance of the Greek forces to form line of battle. 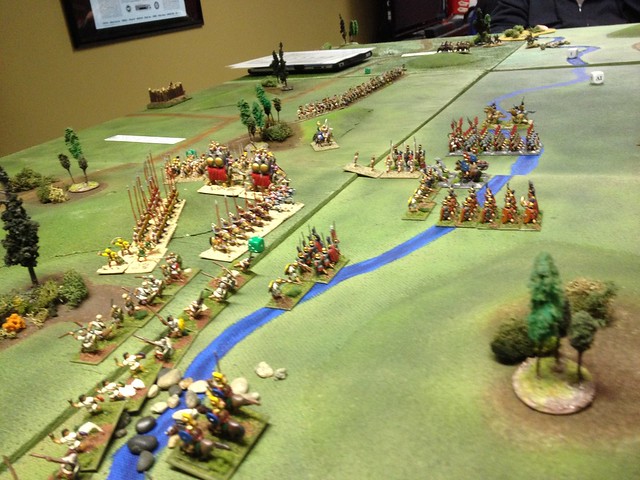 The Greek elephants were unleashed early, in an attempt to roll over the Roman commander, Publius Valerius Laevinus. 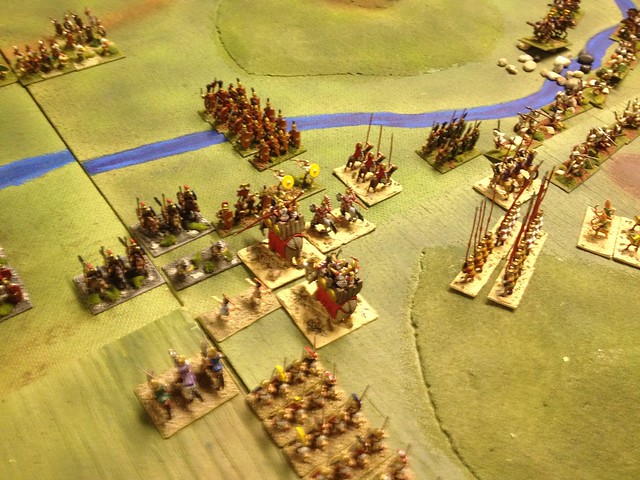 However, the Romans held fast in the face of their monstrous foes, forcing them to recoil and panic. Both elephant units were destroyed! The phalanxes moved forward to plug the resulting gap. 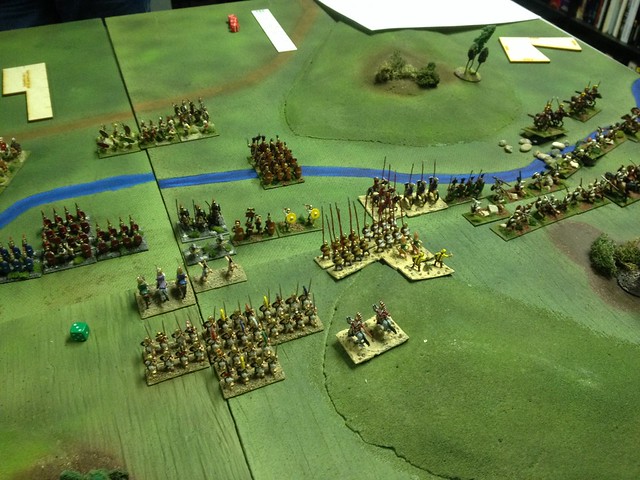 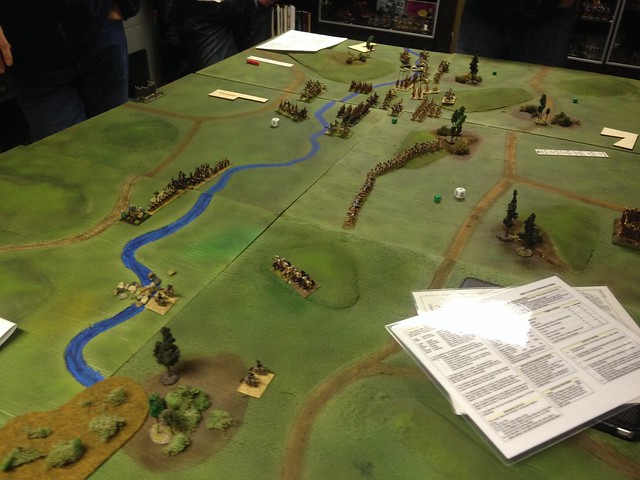 To the south, the Romans failed to cross the river, but a couple of stands of Roman cavalry tied up a quarter of the Greek forces. In the centre, the battle lines got confused as forces collided, recoiled, and surged back into battle. In the distance can be seen a fight between Greek and Roman cavalry, between the lines of Dallas' hoplites and some legionaries. 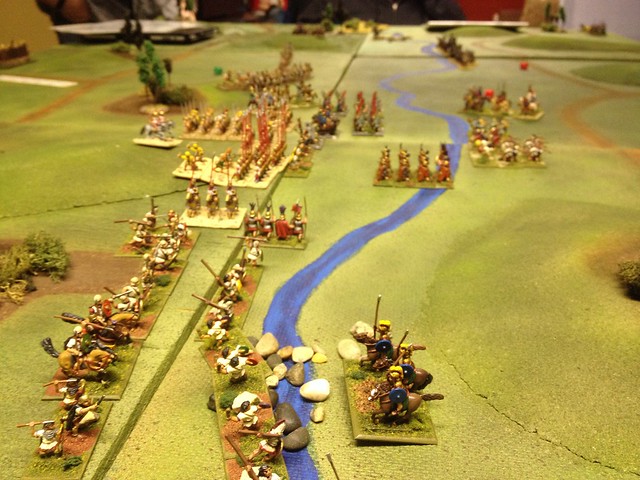 The cavalry from both sides in front of Dallas were all destroyed. The left end of the Roman legionary formation started to turn in as the pike and spear phalanxes ground ahead. 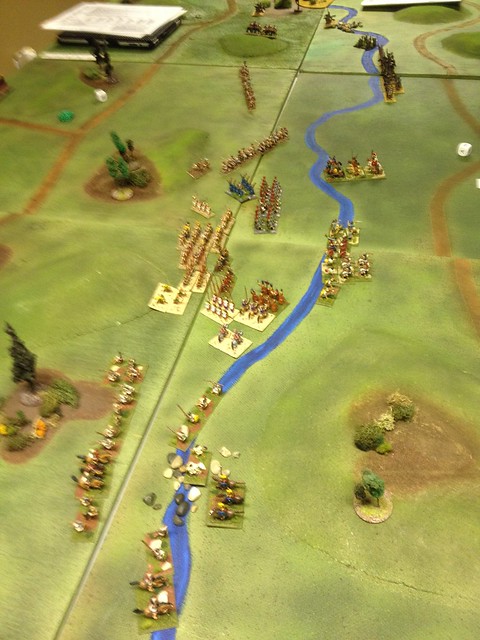 After losing 12 stands (1/4 of their entire force), the Romans called it quits. However, the Greeks had  in return lost 9 stands! 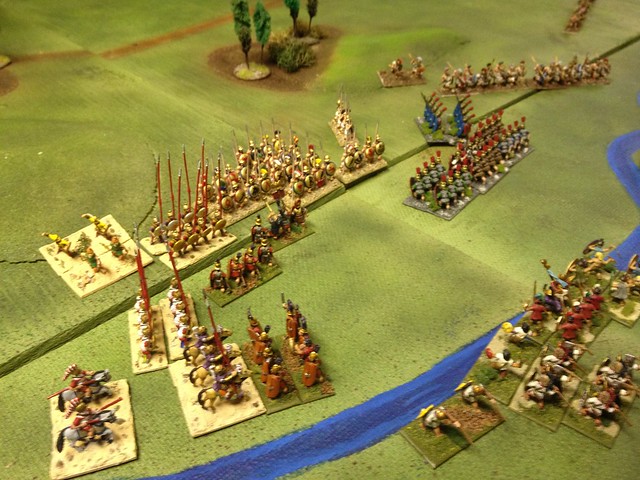 Below, a photo of the butcher's bill: all the units removed from play. 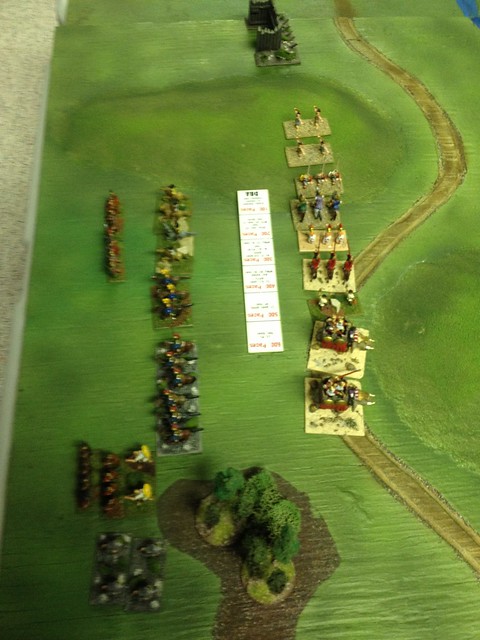 Though the Romans got stalled by the river, the game was very close. Frederick also claimed a well deserved moral victory in the destruction of the Greek elephants. In retrospect, forcing the Greeks to deploy just a little further away would have allowed more of the Roman and Carthaginian heavy infantry to get into the fray.

Historical note: The phrase "Pyrrhic victory" is named after Pyrrhus, whose army suffered irreplaceable casualties in defeating the Romans at both Heraclea and at Asculum in 279 B.C.E.,  during the Pyrrhic War. After the latter battle, Plutarch relates in a report by Dionysius:


The armies separated; and, it is said, Pyrrhus replied to one that gave him joy of his victory that one more such victory would utterly undo him.

The only ancients gaming we usually do on a Thursday night is the odd Gladiator skirmish game. It was fun to see everyone caught up in a large game involving such substantial forces. The game also went much faster than if we had used a more complex set of rules, such as DBMM, Hail Caesar, or Clash of Empires. Looking forward to playing more ancients in the future!

I love DBA - and big battle is so good for multiplayer games. Great report.

Great report, Dave. Thanks to all who brought out figures and terrain for the game!

Looked like an awesome game and a fun time. Great report.

This is probably as daft as it can get for a refight of Heraclea in respect of the numbers and army compositions but hey, DBA is a licence for creative expressionism and it looks like it was fun.